On February 7th, Vice President Mike Pence voted in favor of Besty Devos, breaking a 50/50 tie in the Senate and confirming her as the Secretary of Education.

Devos's nomination was extremely controversial. Senators received a record-setting average of 1.5 million phone calls a day until her confirmation hearing. With such a controversial figure becoming the head of public education, I wondered how Lake Sumter felt. Asking a variety of students and staff at the South Lake Campus what their reaction to Devos's confirmation was, I got answers ranging from surprised and appalled to "Who is Betsy Devos?" The one reaction I did not receive was excitement. 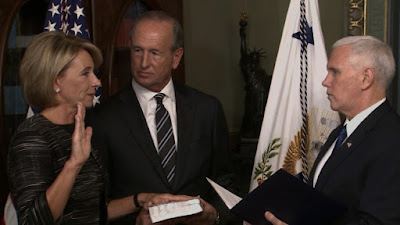 The biggest criticisms were over her lack of experience and allegations of bribery. Jerod Cinco, (student), said, "If you're the head of public education, you should have experience in public education." Before being confirmed, Devos had never attended nor worked in a public school. Others worried she bought her position. Florida Senator Rubio received $93,000 from Devos and voted yes on her confirmation. Kristian Algarin, (student) commented, "The money shows she had influence over him."

Despite these apprehensions, some believe she can have a positive impact if she focuses on the right issues. David Walton, (professor) says, "I hope she addresses macro level issues, she won't be able to fix every little problem. She should focus on larger matters such as the college debt crises."

Love or hate her; she is in charge. Let's hope her success is our success.