What Makes a Meme, Part 1: An Introduction

By Katie LeJeune
A screaming Meryl Streep, 80’s one-hit-wonder sensation Rick Astley, and the kids’ television show LazyTown. First impressions won’t help in figuring out the connection between the items on this list, unless, that is, you know your memes.
The word meme was first coined by Richard Dawkins, a British scientist, in his book The Selfish Gene (1976). Back then, the word meme meant “a unit of cultural transmission.” Its current definition is still true to its roots, but Internet memes, the focus here, are a little more specific. While still allowing the vague freedom associated with previous definitions, the Merriam-Webster description takes into consideration the visual aspects brought forward via the Internet’s nature. But to some, technical definitions don’t truly capture the essence of memes.
“It’s its own form of comedy,” explained self-proclaimed meme connoisseur Jonathan Eldredge, “but not everyone understands it.”
Eldredge’s best friend Ryan Purvas, another connoisseur, joined in: “It’s just something that people make to laugh at.” He shrugged, adding, “Like, not everyone will find an offensive meme funny, but some people will.” 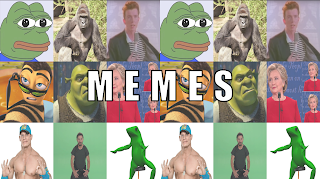 Looking at context of memes is important in understanding them, and a large part of that stems from where we find memes. For connoisseurs Eldredge and Purvas, there’s a big difference in the where, but not in the why.
Eldredge gets most of his memes from Facebook site communities dedicated to memes and video games (Melee Hell in particular was brought up several times). Purvas prefers mobile apps like Instagram and iFunny. Both are able to reap the benefits.
“It’s like, not everyone is comedic,” explained Eldredge. “The easiest way to make someone laugh is to share a meme.”
It’s also the easiest way to make friends, and no one knows that better than Eldredge. “Me and Ryan, we bonded more over memes than actually being friends.” He looks beside him at Purvas, who dabs slowly, as if to emphasize the point. “It’s like, literally this person would understand this completely, and so you share memes,” Eldredge summarizes.
This is the first in a series of articles that will look at what makes memes go viral, as well as how we’ve ended up using them to communicate. If you’d like to contribute your thoughts on memes, send an email to lssc.angler@gmail.com, subject line: “re: what makes a meme.”

- May 01, 2017
Email ThisBlogThis!Share to TwitterShare to FacebookShare to Pinterest