On March 8th, women everywhere came together for a day of equality. This day is known as International Women’s Day, a day celebrating feminism. On this day, feminism was celebrated globally. The women, and some men, of Lake Sumter State College found themselves looking at what feminism meant to them. 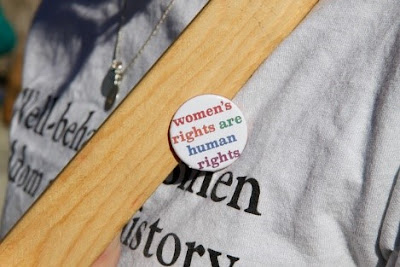 Despite the true definition of feminism, everyone defines the word differently. However, most believed in the same core value: equal rights for all people. When asked if they considered themselves feminists, most responded with a resounding "yes."

One female student, Nyssa Phokakul, includes denying gender roles in her definition. “In society, we are expected to be the ‘stay at home housewife’ when we are capable of doing much more than that.” Another female student stresses safety for women in her definition, saying that “To be a feminist is to want every woman to be able to walk down the street without being cat called.” She even plans to carry this with her into her career, where she plans to focus on helping rape and sexual assault victims as a psychologist.

Students Carina Vitale and Alara Nigro plan to use their feminist strength to become doctors. Alara Nigro explains that, “As a woman, most people expect you to be a nurse, but why stop there? Women can be doctors, and they can save as many lives as a man.”

Male student, Joshua Lowe, says he is a feminist, and he believes in “equality for women in all aspects.” Of course not all people consider themselves feminists. One male student, Adam Gross, does not identify as a feminist due to their radical nature. Instead, he just knows he believes in equality, regardless of gender, race, or sexuality.

Feminism may get a bad reputation, but the heart of the movement delivers one key message: a woman can do anything she sets her mind to, not just on the International Women’s Day, but every day.