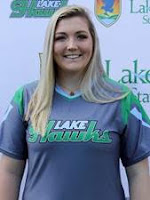 Thanks to Bennett, LSSC Softball won 7-6 on Friday at home against Polk State College.

The sophomore catcher says that the grand slam wasn’t even the best part of the game. “Winning the game for the team was the most important to me,” she says. “Everything we do on the team; we do for each other.”

As for the rest of the season, Bennett says the team is off to a great start and she’s “looking forward to continuing their momentum throughout the season.”

The Lady Lakehawks play at home tomorrow, Feb. 10, against Palm Beach State and away at Pasco-Hernando State College on Saturday.

espnW connects young women with the sports they love and follow. It is ESPN’s first dedicated content and digital business initiative designed to serve, inform and inspire female athletes and fans.

- February 14, 2017
Email ThisBlogThis!Share to TwitterShare to FacebookShare to Pinterest