On January 22, 2017, approximately 470,000 women and men alike marched in Washington D.C. to advocate for women’s rights, says the New York Times. In support of the march in Washington, cities around the nation hosted sister marches, including one in the city of Orlando. Throughout the country, an estimated 3.3 million marchers came out to spread love and sisterhood, according to Vox’s Sarah Frostenson. Despite the many people marching to peacefully protest the new administration of Donald Trump, it was clear that the majority of the focus was on acceptance and unity. 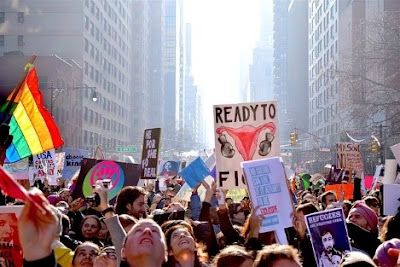 The Orlando march was no exception. Lake-Sumter State College professor Toni Upchurch stressed this matter and shared her thoughts on Facebook after attending the march in Orlando. “We met so many people willing to stand up for the equality of all people.” This historical event caught the attention of major media, but also the eyes of Lake Sumter State College students. One female student, 18, claims that the Women’s March was a way for the country to show that “there are issues that women are willing to fight to fix and that they feel very strongly about.” Dual Enrollment student Alara Nigro sees the Women’s Marches as “a glimmer of hope,” that makes her feel proud to be a woman. It is clear that these beautiful demonstrations of the American spirit have inspired many across the nation, even those here on our own campus.

- January 30, 2017
Email ThisBlogThis!Share to TwitterShare to FacebookShare to Pinterest